Professor Hawkins has discovered startling connections between the world’s chaotic conundrums, the Orichalcos stones and an ancient lost civilization! However, before he can reveal his findings to Yugi, he’s kidnapped by Rafael! Yugi’s on the trail, but is this an elaborate plan to trap the Pharaoh? 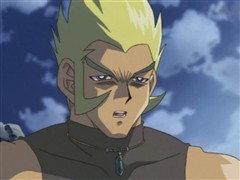 Isolated on a steep mesa in Death Valley, it’s a Wild West showdown between Yugi and his fiercest challenge yet: Rafael and his group of guardian monsters! Rafael’s strong symbiotic relationship with his monsters won’t allow him to let a single one rest six feet under in the graveyard! Will Yugi be quick on the draw and break through his gang of guardians, or will Rafael show that he’s the new sheriff in town?