With his life points on the line, Crow turns to his feathered friends in a last ditch effort to take out Greiger’s Earthbound Immortal. Can Crow and his Blackwing’s rise to the occasion, or will this Dark Signer’s dark deck sink any chances they have of being victorious? 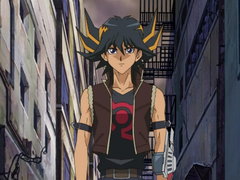 Haunted by the memories of his last battle with Kalin, Yusei looks to bury the past by agreeing to duel his former friend in a rematch. Can Yusei defeat Kalin and seal the tower that this Dark Signer is guarding, or will Kalin overcome Yusei’s defenses and seal the world in eternal darkness?