The Yu-Gi-Oh! Classic: The Complete Set

Yu-Gi-Oh!, the original and longest running Yu-Gi-Oh! series, is finally available in a complete box set!

Based on the hit manga series, Yu-Gi-Oh! follows the adventures of a boy named Yugi and his friends who love the newest card game that is sweeping the nation! In this game, players pit monster against monster in high intensity duels. Yugi and his friends are obsessed with the game, which is packed with awesome monsters and powerful spell cards. But there's more to this game than meets the eye. Yugi solves an old Egyptian puzzle that infuses him with the energy of an ancient spirit. Their forces unite to form a stronger, more confident duelist, for Yugi needs all the help he can get - the fate of the world is in the balance!

Follow Yugi and his friends through five seasons, from the streets of Domino City, through epic duelist tournaments, and even into ancient Egypt!

The Yu-Gi-Oh! Classic: The Complete Set includes all five seasons of the show, as well as the movie "Bonds Beyond Time" and comes in a special slipcase box containing 32 discs, and a collectible booklet.

The set will be available exclusively through Amazon.com on July 15th 2014. 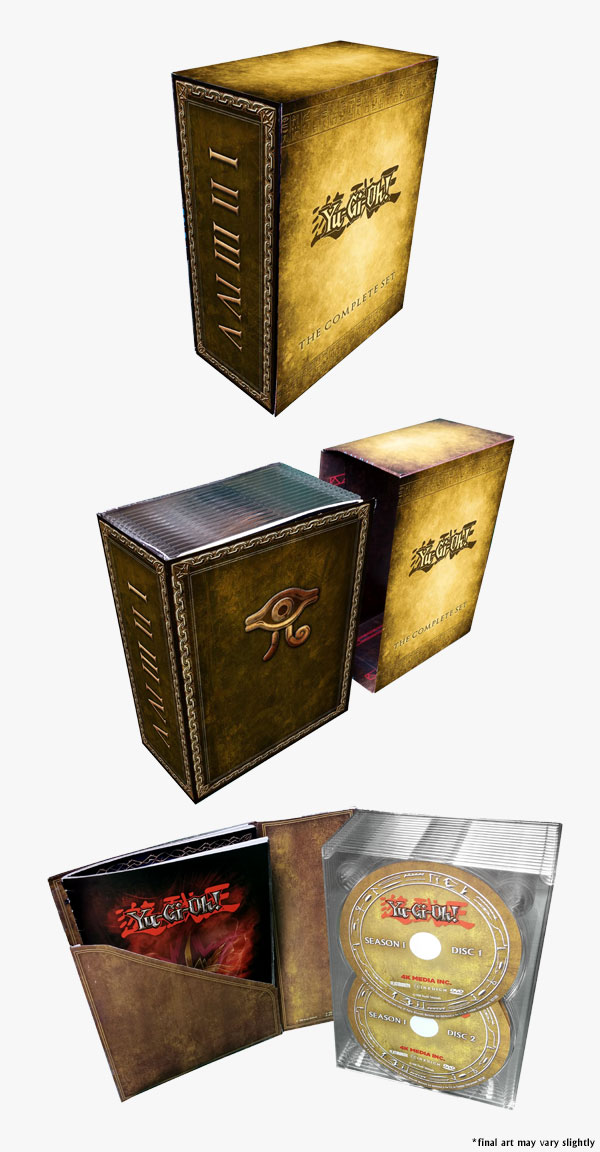 Yu-Gi-Oh! Bonds Beyond Time will also be available on DVD and Blu Ray on July 15th.

Yu-Gi-Oh! is also available on DVD as individual seasons. 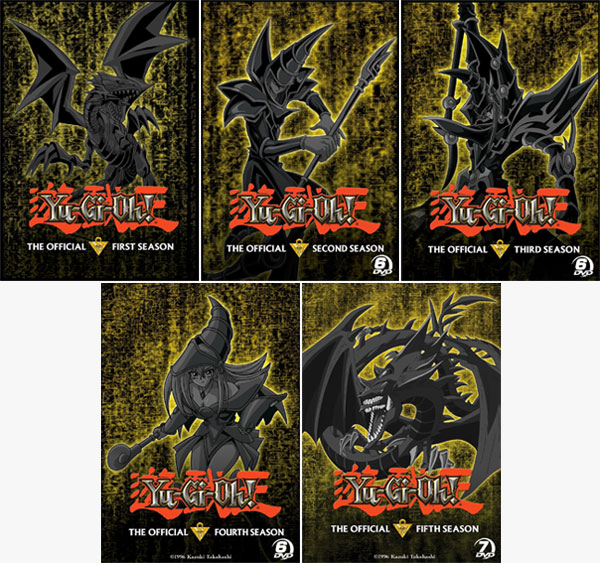 Meet Yugi and his best buds Joey, Tristan and Téa. They share a love for the newest game that’s sweeping the nation: Duel Monsters!

Legend has it five thousand years ago, ancient Egyptian Pharaohs used to play a magical game very similar to Duel Monsters. This ancient game involved magical ceremonies, which were used to foresee the future and ultimately decide one’s destiny. They called it the Shadow Games. Since the game used so many magical spells and ferocious creatures, it wasn’t long before the game got out of hand and threatened to destroy the world. Fortunately, a brave Pharaoh stepped in and averted this cataclysm.

Now, in present times, the game has been revived in the form of playing cards.

Meanwhile, Yugi’s grandfather gives him an old Egyptian puzzle that no one can solve, but when Yugi finally pieces the puzzle together, his life is forever changed.

After defeating Pegasus and winning back his grandfather’s soul, Yugi and the spirit of the Millennium Puzzle begin to feel that this was not the end of their journey. These feelings are futher fueled when a new enemy emerges–the mind-controlling Marik! Armed with another Millennium Item, Marik is able to control the minds of those around him to do his bidding. Marik is plotting to take over the world by acquiring the three all-powerful Egyptian God Cards and the seven Millennium Items with the help of his henchmen–the Rare Hunters!

The Battle City Finals rages to its ultimate climax! As Yugi’s pals succumb one-by-one to the dreaded magic of the Shadow Realm, Yugi and his remaining friends must travel to the ultimate dueling arena for the showdown of the millennium against the nefarious Marik! It’s time to duel!
However, on their journey, a mysterious child named Noah kidnaps and traps Yugi and friends in a virtual world! To make things worse, The Big 5, the former board of directors that tried to take over KaibaCorp, are working for Noah! In the past, Kaiba thwarted The Big 5 and trapped their minds inside cyberspace, but they’re now back for revenge and planning to steal our heroes’ bodies to escape into the real world!
Who is this mysterious Noah, and why does he know so much about Kaiba’s past? Can Yugi escape from the virtual world in time to stop Marik before his friends are lost forever in the Shadow Realm? It’s time to duel!

After the conclusion of the Battle City Finals, chaos erupts once again! The three Egyptian God Cards are stolen! A terrifying new villain emerges! And as if things couldn’t get any worse, real monsters begin to appear around the world, terrorizing the population! Are these strange events connected, and can they be resolved!? Yugi and the gang better find out… before the planet faces total destruction!

After four seasons of searching for answers, Yugi finally uncovers the secrets of his ancient past! Through the magic of the three Egyptian God Cards, Yugi and his friends are suddenly transported 5,000 years back in time! Now they must battle the ultimate evil force to save the world from devastation, for if the past is destroyed…so is the future!

Previous Article Next Article
Our website uses cookies to make your browsing experience better. By using our site you agree to our use of cookies. LEARN MORE.
Accept